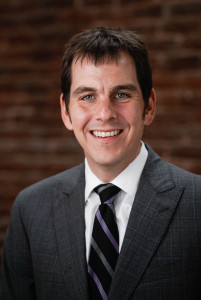 Matthew Lyon is the Associate Dean for Academic Affairs and an Associate Professor of Law. From 2008 to 2011, he served as the Senior Judicial Clerk to Justice Gary R. Wade of the Tennessee Supreme Court. He later served for one year as Chief of Staff to Chief Justice Wade.

Prior to working for Justice Wade, Lyon was an associate at Sidley Austin LLP in Chicago. His practice focused on securities litigation, mergers and acquisitions litigation, and energy regulatory work. He has represented corporations and their officers and directors in federal securities fraud class actions, SEC investigations, and directors’ and officers’ liability claims. He also counseled Illinois’ largest electric utility regarding a variety of regulatory and legislative matters. In addition, he was involved in the firm’s pro bono efforts, representing a death row prisoner in Alabama in his post-conviction proceedings.

Prior to law school, Lyon worked as a Social Science Analyst in the Office of the Assistant Secretary for Planning and Evaluation at the U.S. Department of Health and Human Services in Washington, D.C. In that role, he helped develop a research agenda to evaluate the effects of the 1996 welfare reform law and worked with states and private research organizations to conduct and analyze that research. He was a participant in the prestigious Presidential Management Intern (PMI) program, during which time he worked for the Senate Health, Education, Labor and Pensions (HELP) Committee.

Lyon is a member of the Tennessee bar and is also licensed (but currently inactive) in Illinois. He is a member of the Executive Council of the Business Law Section of the Tennessee Bar Association and the Publications Committee of the Knoxville Bar Association. He is also a member of the American Bar Association and its Section on Legal Education and Admissions to the Bar. His research is focused on business law and civil litigation, particularly variations among the states and between the state and federal systems in those areas. He studies how state courts and legislatures use their rules of civil procedure and/or substantive laws governing corporations to achieve their explicit or implicit policy goals. He also believes strongly in writing and presenting on issues of interest to local and state bar.

Lyon believes that a successful law school course is one that consistent, challenging, and fair. Course expectations should be clear and the professor should keep his or her commitments to the students, while at the same time regularly forcing the students outside of their comfort zones. Law students, even 1Ls, should become familiar with how the abstract legal doctrines they study will apply both in practice and in their everyday lives. He also requires students to break out of the “law school bubble” and be aware of current events related to the subjects they are studying. The law school’s student body voted Lyon Professor of the Year in 2014-2015.

When he is not at school, Lyon is usually at home with his wife, two children, and two pit-bull mixes. Dean Lyon and his family are active in their church, First Baptist Church of Knoxville, where he serves as a deacon and co-teaches a Sunday School class. In his limited spare time, he enjoys running, watching sports, and listening to all genres of music, but particularly power pop, old-school hip hop, and ’70s and ’80s “yacht rock.”